RWANDA-DRC:RWANDAN TROOPS HAVE NEWLY INVADED THE EASTERN CONGO IN A MILITARY CAMPAIGN TO ATTACK RWANDAN HUTU PEOPLE BELONGING TO THE FORCES FOR THE DEMOCRATIC LIBERATION OF RWANDA (FDLR)

BY Keith Harmon Snow
Rwandan Defense Forces commanded by war criminals indicted by the Spanish high courts have crossed the Congolese border and have amassed in the Congolese territory of Masisi over the past 48 hours. U.S. Special Forces belonging to the PEntagon's Special Operations Command (SOCOM) have also been sighted in the region of North Kivu. 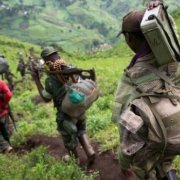 The corporate western-based propaganda system calls the FDLR the "Hutu extremists and 'genocidaires' who committed genocide in Rwanda in 1994 and then fled to the Congo where they have committed massive war crimes and genocide and have been seeking to overthrow the government of Rwanda in an armed invasion of Rwanda." This is total nonsense: most of the FDLR in Congo today are too young to have been involved in genocide in Rwanda -- if we accept the standard narrative -- and those that are not too young who fled Rwanda in 1994 are true liberation fighters who had seen their entire families, wives, children, villages wiped off the face of the earth by the scorched earth campaigns of the Rwandan Patriotic Front led by now President Paul Kagame and the elite Tutsi fascists in power in Rwanda today.

The RPF invasions of Rwanda (1990-1994) and then Congo (1996- present) were backed by the Pentagon, Britain and Israel. The latest Rwandan invasion has not yet been confirmed by Martin Kobler, the United Nations (MONUSCO) Special Representative to the Secretary General (SRG). MONUSCO (formerly MONUC) has supported western plunder and occupation of the Congo. The latest Rwandan invasion is in contravention of international law and the sovereignty of the nation and people of the Congo. War crimes, crimes against humanity, and further acts of genocide (against HUTU people, including noncombatant women and children of Hutu origin and non-combatant women and children of Congolese origin) are imminent, if not already occurring in Masisi.
Posted by Unknown at 7:19 PM