Have You Ever Wondered Why a US Based Enough Project Organization Is Guided By Hatred Against Hutu Communities In The Great Lakes Region?

ENOUGH PROJECT MUST BE PRACTICAL IN ITS RECOMMENDATIONS:
Have You Ever Wondered Why a US Based Enough Project Organization Is Guided By Hatred Against Hutu Communities In The Great Lakes Region?

A Rwandan girl who witnessed all the crimes committed in DRC between 1996 and 2004. I take this opportunity to answer the report published by the US-based organization called Enough Project and also take this opportunity to identify flaws in their judgement and research. I will also provide my assessment, opinions, and ideals. After that I will conclude this letter by developing a theoretical 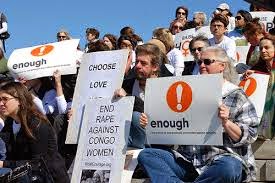 framework that I think is practical to ending insecurity and crimes continued being committed against innocent Congolese and the Rwandan Hutu refugees in DRC. I hope that by the end of this letter all stakeholders, especially Enough Project, international community, Rights bodies, UN peacekeeping mission (MONUSCO), Congolese Government, Kigali government, US government, and the Great Lakes Council on security and peace in the region would have understood that the FDLR issue is not as simple as the Enough Project puts it. If it was as simple then it could have been solved in the last 20 years. As we young people mature as FDLR gets more support from patriotic youth who want nothing else but the truth about what really happened in Kigali in 1990s. As we experience Western democracy the more we want Rwanda to embrace true democracy and embrace all her citizens regardless of their political ideology.

To answer the above question one must first of all understand the background of the existence of this organization and why it was created in the first place. Enough Project was created to destabilize the region in order to protect the American interests, which the Clinton administration had established in late 1980s and early 1990s. Those interests that ENOUGH PROJECT is responsible of protecting through smear propaganda machinery and destructive politics include but not limited to:
1.      Making sure the Hima regime in Uganda stay for generation by supporting President Yoweli Museveni at any cost through both military and diplomacy support. This will ensure that the Bantu people of Buganda never rule in Uganda so that the US interests in Southern Such as oil exploitation remains in the hands of American oil companies.
2.      Making sure that the Tutsi regime established in Rwanda by the Clinton administration lives forever through the Tutsi succession so that Paul Kagame and other Tutsis continue to oppress Hutus so that American business companies have enough access to mineral rich Eastern DRC through Rwanda. This is achieved by the ENOUGH PROJECT programs that spread smear campaigns and rumour mongering against the Hutu rebel movement FDLR calling the members of the FDLR mostly as young as 20 years of age to be genocidaires so that they will never attend schools but remain in the bush and die there either of kindnesses or Rwandan military operations.
3.      Making sure that the people of Congo never experience any democratic regime so that the American illegal companies that are illegally mining in Congo continue to make profit whereas women, children, and girls are being raped on daily basis by the Tutsi backed rebels. This will ensure that US interests are safeguarded at the expenses of lives of Hutus and Congolese people.
4.      Making sure that Hutus and Congolese educated people who live in western countries do not have platforms to tell their sides of the story. This will be achieved through the events that ENOUGH PROJECT organizes across America telling lies on what is truly happening in Eastern DRC, Rwanda, Sudan, and Uganda. These meetings organized by the ENOUGH PROJECT would target programs organized by the friends of Congo and other Congolese and Rwandan diaspora programs.
5.      Making sure that there is no Hutu or Congolese scholars who understand better the Great Lakes conflict get a job in international think tank such as the ENOUGH PROJECT because it can hinder their propaganda machinery designed to spread rumours about Hutus and FDLR. Once this is done then there is no balanced voice for the sufferings of the Hutu people found in Rwanda, Burundi, in Masisi, Rutchuru, and Walikali in Congo, and Bufumbira in Western Uganda.
6.      Making sure people who support the dictators in the great Lakes region such as Kagame, Museveni, and Kabila get key positions in the ENOUGH PROJECT so that they can influence research outcome of the organization research and publication desk. This is emphatically put to the recruitment desk to make sure as many Tutsis are recruited in order to be given a platform to spread their lies and continue branding FDLR as a gang of genocidaires and yet as we have seen majority of the people fighting in FDLR have never been to the Rwandan soil are just children who are fighting to have rights to go back to their ancestral home.
7.      Making sure that Rwanda will never have democracy so that there is a never ending chaos in the region to make relevant of the US activities in the region such as the ENOUGH PROJECT which is not after making peace in the region but making sure Hutus are exterminated and neutralized at all the ages so that the Tutsi regime in Rwanda remain in power despite many human rights abuses Kagame has been committing as stated by the Human Rights Watch and other rights organizations across the planet.

B.     The Enough Project Report is a Pure Propaganda Machinery

To achieve this propaganda, we have seen the ENOUGH PROJECT continues publishing non-factual and biased reports such as the one published on Nov 18, 2014 entitled:” How to Dismantle a Deadly Militia: Seven Non-Military Tactics to Help End the FDLR Threat in Congo” of which I am going to delve into it here below so that we can expose the work of Enough project in details. After this article you would have understood that ENOUGH PROJECT is not after the love of Africans but one of those western mechanisms designed to destroy Africans and loot their natural wealth.

D.    THEORETICAL AND PRACTICAL FRAMEWORKS TO ADDRESS FDLR ISSUES AND FIND LASTING PEACE AND SECURITY IN THE GREAT LAKES REGION

If international community, humanitarian organizations, rights organizations, and Enough Project are interested in addressing issues that contribute to insecurity in the region they must go back to the history and look at the root causes of this insecurity in the region. They have to be open-minded consultative people who are open to new ideas from new entities because it has been proved that they way of thinking has never bore any tangible results in the region. Welcoming new ideas will bring in various outstanding issues which have either been ignored by the above entities because of their own political and socioeconomic interests they have in the region or have not been thought of because most of the players concerned with peace in the region are foreign to what is happening in the region and have no clues of what really causes people to fight in this region. Once these issues are put together and all elements have been put together to prepare for the resolution of the security issue in the region then people must accept to hear and work on the following with an immediate effects in order to have a lasting peace in the region by:
1.      Going back to the discussions that were facilitated by the San Egidio, which calls for the establishment of democratic institutions in Rwanda so that people are free to participate.
2.      To understand that more than ¾ of the FDLR fighters are below 30 years and are innocent people whose plights should be safeguarded and accorded unconditional rights to go back to their country of origin which is Rwanda
3.      To call for an inter-Rwandan dialogue that discusses political issues that have divided Rwandans for years and be discussed openly so that people are heard equally.
4.      To set up a taskforce that involves UN, International community, and regional bodies to discuss the issue of military and demobilizations that will prepare for the establishment of national forces instead of a political force like the one that characterizes Rwanda today.
5.      Lastly, to establish a Truth, Justice, and Reconciliation commission that will work to write a new constitution that will put in place judicial, healing, and reconciliation mechanisms that will play a bigger role in national reconstruction and healing initiatives.
E.     Conclusion
Without these five elements being tried those who think they understand what could resolve FDLR and security issue in the region should forget about it. FDLR is no longer a small fraction of 6000 fighters but a movement that represent over 80% of Rwandans and has mobilized enough support of younger generation both inside and outside Rwanda. FDLR is here to stay unless its demands which are the demands of most of Rwandans are respected and worked on seriously, the world should be ready for another 20 years of FDLR in the region. FDLR is not any kind of a rebel movement just has no ideology and a following. FDLR has the people who are anxiously counting on it for their freedom, independence, patriotism, nationalism, and belonging. That is what most of the Rwandan people feel when the world FDLR is mentioned. To solve its problems one must be ready to accept the reality.