Posted by Unknown at 9:22 PM No comments:

Bishop Rucyahana and General Bosco NTAGANDA: The Bagogwe Connection that led to the destruction of Hutu Refugees in DRC 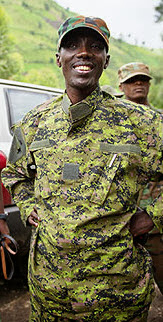 I. The Bagogwe
If the West knows about ethnicity in Rwanda at all, it is in the familiar form of the Hutu and Tutsi. However, there are further sub-groups and clans within these broader configurations. One clan that features prominently in the story of Bishop John Rucyahana and his support for M23 is the Bagogwe clan.
Who are the Bagogwe? This article (in French) explains the roots of the Bagogwe ethnicity inside Rwanda:

Bagogwe are Tutsi whole hand. Indeed, in the former Rwanda, Bagogwe families  regrouped into clans. The family clan was more than an ethnic identity. It is recognized by clan membership. The most important lineages were “abega” the “abahumuro” and “abatsobe.” …The identity was also related to the area occupied by a population. Thus, Bagogwe assumed the name of the region they occupied, the Bagogwe, the namesake of a rocky hill “in Iberia rya Bagogwe” …It is far from a designation of a sub-ethnic group or a sub-race. (Note that this is a Google translation and could be improved upon).

Jason Stearns says of the Bagogwe that “clan identity amongst the Tutsi does play a difference, as does their socialization within the RPF. We currently see some divides between the Bagogwe, mostly from Masisi, and what is usually referred to as Banyanduga or Bajomba, many of whom are from Bwisha in Rutshuru. This is reinforced by a class divide – Bagogwe are often poor cattle-herders.”
Stearns is referring to divisions among the Bagogwe from the Congo who have participated in rebel movements fomented by Rwanda, but there is a strong Bagogwe presence inside Rwanda itself. In fact, prior to the outbreak of the genocide in 1994, the Bagogwe were themselves targeted for genocide by the Habyiramana regime in the towns of Ruhengeri and Bigogwe. Amnesty International wrote that the Bagogwe clan “was targeted for elimination”(AFR 47/02/92).

II. The Bagogwe as Soldiers for Kagame

It seems that after the RPF took over in Rwanda, the Bagogwe were often used to do Kagame’s dirty work. According to former Kagame bodyguard Aloys Ruyenzi:

In 1996, many Banyamulenge and Bagogwe were recruited by the DMI and integrated into RPA battalions (for example, the 59th Battalion) and the Alliance of Democratic Forces for the Liberation of Congo-Zaire (ADFL-CZ) forces to participate in the mass killings in Zaire. The murder of Hutu refugees located near Kisangani started on the “Live Goshe” road near Lubutu. The next massacre occurred on Gafasende Road, located 59 kilometers from Kisangani. The RPA feared these killings would be detected by the human rights organizations that were pressing for an on-site investigation. The DMI staff was ordered to exhume the all the bodies from the mass graves, burn them, and then throw all the ashes into the fast-flowing waters of the Congo River.”

In November 2009, Jason Stearns talked about unrest brewing in the DRC again, and said that “…previously the Tutsi faction was represented mostly by upper class Tutsi from Goma and Jomba, while this time they seem to be mostly from the lower class Bagogwe clan from Masisi.
The leader of the Bagogwe faction inside both M23 and the CNDP, which was the precursor to M23, was Bosco Ntaganda. Some of this ethnic background is explained in this story:

…Rwanda is aware that although it can influence M23, it does not have control over it. For example, one of the factors behind the current infighting in the rebel group is clan politics and rivalries. Ntaganda is from the Bagogwe clan alongside Baudouin Ngaruye. Meanwhile Makenga is also from the same Bagogwe clan but grew up in Rucuru among Banyejomba clan of former CNDP leader, Laurent Nkunda. Ntaganda has always seen himself as a rival to Nkunda and enjoys large support among the Bagogwe. This meant that Makenga could never rival him for support in the clan which made him court the Banyejomba. Ntaganda has since used his identity to wrestle control from Makenga.

As this story put it:

Ntaganda, a hardliner, has the support of the Bagogwe Tutsi clan from the mountainous Masisi region, who have tired of the dominance of Nkunda’s Rutshuru-based Tutsis in the rebel leadership.
Support for both CNDP and M23 came from Bagogwe inside Rwanda. During the CNDP rebellion, the US embassy in Kigali sent a cable pointing out that there was fundraising for Laurent Nkunda and CNDP occurring among the Bagogwe in Rwanda:
Reports of financial contributions to the CNDP by private individuals come as no great surprise.  Mission recently heard reports of informal collections of  funds for Nkunda among the Bagogwe, a Tutsi clan that  straddles the Rwanda – DRC border, and which claims him as a  member. Reports of CNDP recruiting in the refugee camps also continue, as do reports of demobilized Rwandan soldiers “re-mobilizing” themselves by voluntarily crossing to join  Nkunda.

The following table outlines the backgrounds of three rebel leaders who operated for Rwanda in the DRC.

Where does Bishop John Rucyahana fit into this picture? In 2012, the UN said that Rucyahana was the “president of the Bagogwe community”:

John Rucyahana has been the head of the Anglican Church at Ruhengeri, president of the Bagogwe community from Rwanda, and President of the Rwandan National Unity and Reconciliation Commission.

Details about this role in the Bagogwe community are lacking, but Rucyahana’s fundraising and recruiting efforts for M23 were clearly in support of the Ntaganda faction, as subsequent evidence makes clear.
In late 2012, Rwanda decided that Bosco Ntaganda was unreliable and decided to eliminate his faction of M23 in favor of a faction led by Sultani Makenga:

…Rwandan officials who had previously supported Ntaganda, and who could no longer control his network in Rwanda or his actions in the DRC, decided to sideline him from M23 and to dismantle his support in Rwanda. In late December 2012, Rwandan authorities arrested RDF Col. Jomba Gakumba, due to his close ties with Ntaganda, according to former RDF officers and an M23 collaborator. A former Rwandan Patriotic Front (RPF) member, two former RDF officers and a politician loyal to Ntaganda, told the Group that Bishop John Rucyahana, a Ntaganda ally in Rwanda who recruited politicians and raised funds for M23, had to stop his collaboration (emphasis added). The Group has sought clarification from the Government of Rwanda on the matter and is awaiting a response.

A “civil war” of sorts broke out between the two factions within M23, with Bosco’s faction losing badly because Rwanda was determined to eliminate him. Anyone who helped him was arrested:

…on 10 March 2013, Rwandan authorities arrested Gafishi Semikore and Theo Bitwayiki, while they attempted to help Ntaganda from Rwanda by supplying him with small quantities of ammunition, food and medical supplies during the hostilities between the two factions in Kibumba.

With Rwanda hunting him, Bosco Ntaganda had to flee for his life. How he was able to do so is laid out for us by the UN and sources such as this:

Hailing from Northwestern Rwanda and from the reclusive Tutsi Bagogwe’s ethnics, generally hostile to the current Rwandan  government dominated by Tutsis from Uganda and Burundi, General Ntaganda could rely on a network of incorruptible clansmen. So he was moving from relative to relative, avoiding highly circulated areas and moving in trucks carrying staples to the capital city Kigali. While the DMI killing squad was looking for him in Gisenyi, the volcanoes and Masisi, he had already crossed Kinigi on his way to Kigali.
He reached Kigali late at night on Sunday, where a trusted relative was waiting for him. Early morning, the relative dropped him off close to the US Embassy (emphasis added), to where he walked in and asked for being sent to the International Criminal Court.

On 15 March 2013, Ntaganda clandestinely crossed the border into Rwanda using a small path in the Gasizi area, with one escort…he reached Kigali with the help of his family, and arrived at the United States embassy on 18 March where he requested to be transferred to the ICC, without the prior knowledge of Rwandan authorities. Subsequently, Rwandan authorities arrested an individual suspected of having aided Ntaganda’s escape, and interrogated Ntaganda’s wife and brother.

According to confidential sources, the situation of bishops Rucyahana and Kolini is bad because since (a) the escape of Bosco Ntaganda into the American embassy in Rwanda and (b) intense external pressure to end support for M23, Paul Kagame has abandoned the bishops. A sign of this abandonment is his open admission that churches support M23 as a Tutsi self-protection campaign. A source says that Bishop Rucyahana cannot travel outside Rwanda on orders of the Government (or without its explicit permission); and that in fact Rucyahana’s own driver assisted Bosco Ntaganda to escape to the American embassy. If true, this means that Rucyahana’s driver is or was a relative of Bosco’s all along.
In short, Rucyahana (a) had a driver related to Bosco Ntaganda, (b) was the President of the Bagogwe community in Rwanda, and (c) was sidelined when Bosco’s support network was eliminated as part of the M23 civil war.
The civil war between Bosco’s faction and the Makenga faction may have hurt Bagogwe support for M23, since many native sons of the Bagogwe were betrayed by Paul Kagame. The UN says:

The Group notes that M23 recruitment in Rwanda has decreased since the dismantling of Ntaganda’s recruitment network; community leaders in northern Rwanda who supported Ntaganda have ceased collaborating with the M23. […]
Demobilized Rwandan soldiers have been killed on M23 frontlines in the DRC. The Group obtained the identities and addresses of seven families residing in the northern Rwandan villages of Bigogwe and Mukamira, whose sons fought in the ranks of M23 as demobilized soldiers and died during the fighting between Makenga and Ntaganda.

It is not as clear why Bishop Kolini would support M23, although he preached and served among the Bagogwe in the eastern Congo for many years, and his support for Paul Kagame is probably unwavering. He is also connected to the current bishop of Boga, the Rt Revd William Bahemuka Mugenyi. He has connected the severely weakened AMiA to Bishop William which means that Kolini has ongoing contact with clergy in the DRC.
Rucyahana has appeared in the US recently as part of Kagame’s Presidential Advisory Council. Presumably, he is engaged in what Rwanda calls, “Kwicazwa ku gatebe” – literally “being made to sit on a small chair.” When you fall out of favor with Paul Kagame, you must keep silence and wait, hoping that someone else will soon fall out of favor and a replacement will be needed.
Posted by Unknown at 10:30 PM No comments: