TANZANIA HAS BECOME A HOTBED OF KAGAMES SPIES UNDER PRESIDENT MAGUFULI WATCH: WHO IS MIKE RWALINDA AND HOTEL KAGAME IN DAR

Recently a news broke out in the media and social media that bring together Rwandans around the planet talking about the kidnap of a Tutsi businessman and also a Rwandan spy MIKE RWALINDA. According to different news media owned by Rwandans Rwalinda is currently under the Tanzanian police arrest in Tanzania waiting to be deported to Rwanda which owuld also be what Rwanda is hoping for. RWALINDA has been working for the kigali Tutsi led intelligence for over 10 years. he has also been in charge of Rwandan spy operation based in both Dodoma and Dar Es Salam.


According to INYENYERI NEWS investigation found that Mike Rwalinda has been working with both the Rwanda National Congress (RNC) a Tutsi led opposition to Paul Kagame living in exile and the RPF General  James Kabarebe who is also the minister of the Tutsi led Kigali government of the RPF.

In addition, the newsonline continues its stroy saying that  Gen James Kabarebe has also organized the arrest of Maj Nkubana who was arrested in Tanzania and later deported to Rwanda. Another person mentioned in their story is that the arrest of Lt Tobulende Joel Mutabazi in Uganda was also organized by Mike Rwlainda together with Rene Rutagungira, Kalisa Innocent among others.

Rwalinda also has been smuggling gold from Eastern DRC into Tanzania. The business of gold trade has been taken care of by his Tanzanian concubine they have two kids together. DUring this arrest the Tanzanian security services found Mike Rwalinda with guns as well.

After the Tanzanian government knowing that Mike Rwalinda might be one of those who organized the wrongful death of Reverend Mtikili who was killed in car accident as we have mentioned in hereabove. President Kagame hated Rev. Mtikili because the guy called upon the Tanzanians to understand that there was invasion of Paul Kagame into the Tanzanian system. He also wanted Tanzania to support Rwandan Hutu refugees to go back home so that we dont continue receiving Hutu refugees in Rwanda and yet Rwanda is led by Tutsi minority who took power by force supported by Americans.

The Tanzanian police continue to say that Rwlainda is still under interrogation and questioning. Rwalinda has been working for Kigali under the instructions of Gen James Kabarebe. To deport him to Rwanda would be to commit the same mistakes that the South African government committed when they deported to Rwanda those who assassinated Colonel Karegeya. We hope that Tanzania will be more careful this time around. Although Magufuli went to Kagame Tutsis never forgive and never forget. RPF still does not like CCM and wont rest until CCM is removed from power in Tanzania. 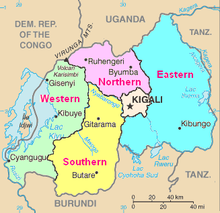